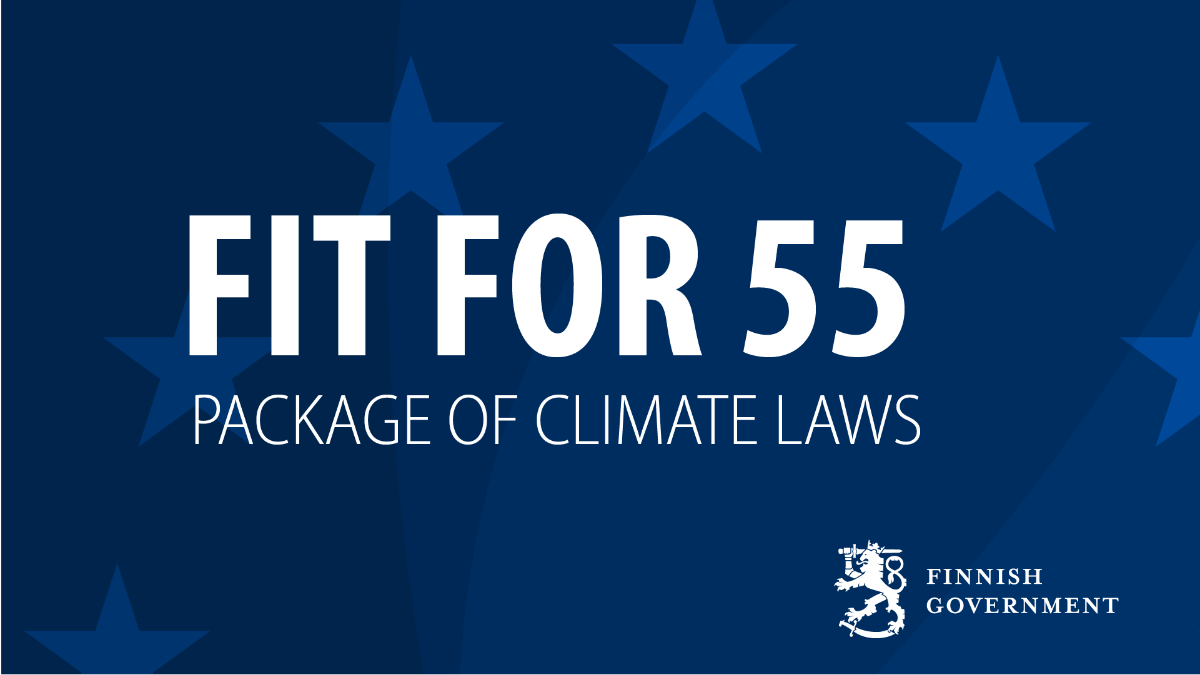 On Wednesday, the European Commission unveiled a major package of legislative proposals on climate that would reduce the EU’s net emissions by at least 55 per cent by 2030. The Fit for 55 package contains 13 legislative proposals, eight of which would strengthen existing legislative instruments and five that are completely new regulations.

“The EU climate package is a huge leap towards a climate-sustainable society built on clean transport, sustainable housing and new green jobs. The EU’s effective climate measures will also help us achieve our own climate neutrality target and will level the playing field within the EU. This package will ensure that all sectors in all Member States participate in combating the climate crisis,” says Minister of the Environment and Climate Change Krista Mikkonen.

The legislative proposals cover a wide range of sectors of the economy, including emissions trading reform, burden sharing between countries, energy efficiency, renewable energy, the role of the land use sector and carbon sinks, emission limits for cars, energy taxes and carbon duties. In the autumn, the Commission will also submit its proposal for revising the Energy Performance of Buildings Directive.

“During the Finnish Presidency, we agreed that the EU would aim for climate neutrality by 2050. Finland has already had a very active influence on the EU’s shared climate policy in general. Our goal is to make the EU the most competitive, socially integrated climate neutral economy in the world. We have also highlighted our national characteristics so that the Commission would be able to take them into account when preparing the package. There is still work to be done, but it is great that in the midst of the COVID-19 crisis, the Commission has succeeded in laying this extensive groundwork, which we can now begin negotiating,” says Minister for European Affairs Tytti Tuppurainen.

“In order to achieve the more stringent targets, we need a package that functions well and takes into account the need for major investments in low-carbon solutions and technologies. The industrial and energy sectors require large amounts of capital invested over the longer term. With this in mind, we need predictable regulation and technology-neutral funding. We also have to ensure that citizens are involved and that the changes are perceived as fair,” Minister of Economic Affairs Mika Lintilä emphasises.

Finland will formulate its own positions on each of the thirteen legislative proposals during the autumn, once Parliament has also returned from holiday.

In line with the Commission’s proposal, emissions should be reduced by 61 per cent by 2030 from the 2005 level in the emissions trading sector. The Commission proposes tightening the target for the emissions trading sector by reducing the amount of annual allowances more swiftly than previously planned, among other measures. At the same time, the free allocation of allowances would be reduced.

“The effectiveness of emissions trading has been improved in recent years, and it is important that we continue to strengthen its impact. The reforms now being proposed are steps in the right direction. At the same time, we need to remember that not all emissions are involved in emissions trading, and we also need robust national plans for climate neutrality,” says Minister of the Environment and Climate Change Krista Mikkonen.

“Winter navigation is an important national issue for Finland as an export country, and we will call attention to it in further discussions on emissions trading in shipping,” Minister of Economic Affairs Lintilä says.

The development of emissions in non-ETS sectors – agriculture, property-specific heating and transport – is regulated by a burden-sharing agreement that imposes a specific obligation on each EU Member State. As a rule, Member States’ obligations are based on their gross national income.

In its proposal, the Commission has set a target of 50 per cent emission reductions for Finland and five other EU Member States by 2030 compared to the 2005 level. This target will have an impact on the medium-term climate plan and the energy and climate strategy currently under preparation, which are due to be completed in autumn 2021.

The Commission’s proposal includes various flexibilities for promoting the cost-effectiveness of climate policy. The proposal also aims to establish links between sectors to ensure that the targets are met.

Reforms in the land use sector will bring transparency

In addition to emission reductions, achieving climate targets will require the strengthening of carbon sinks in the short and long term. The Commission proposes introducing national targets for increasing carbon sinks in the land use sector (LULUCF sector). In line with the proposal, the EU Member States should commit to increasing the carbon removals from sinks to a total of 310 million tonnes of carbon dioxide equivalent by 2030.

According to the Commission’s proposal, the period 2021–2025 would still be subject to the current regulation. For 2026–2030, a quantitative target would be set for each Member State, along with the resulting trajectory to which the actual net emissions would be compared. In addition to strengthening carbon sinks, the reform would simplify the complex accounting framework currently in place and would increase the transparency of monitoring.

A major reform included in the package is that agricultural emissions would be included as part of the land use sector from 2031. In line with the Commission’s proposal, this new AFOLU sector should be climate neutral in 2035. A more detailed legislative proposal on the AFOLU sector would be submitted in 2025.

In addition, the Commission proposes tightening emission limits for new passenger cars and vans. This is also worthwhile in Finland’s view from the perspective of reducing transport emissions.
Tightened limits would promote the electrification of transport in Europe.

The package also includes a reform of the EU’s key energy legislation and would increase targets for renewable energy. The Commission’s proposal would see an overhaul of the Renewable Energy Directive, with the exception of individual articles. It would also expand the scope of the directive in relation to the use of renewable energy and hydrogen in industry and with regard to system integration, power purchase agreements and offshore wind power.

The key themes for Finland in the reform are the heating and transport sectors and the use of forest biomass in energy production (including sustainability criteria). The targets for energy efficiency will be tightened by significantly limiting the current level of energy consumption by 2030 and by raising the annual savings target to almost double the current level.  In the future, public sector buildings will need to be renovated to nearly zero energy levels and the current number of renovations will need to be almost doubled.